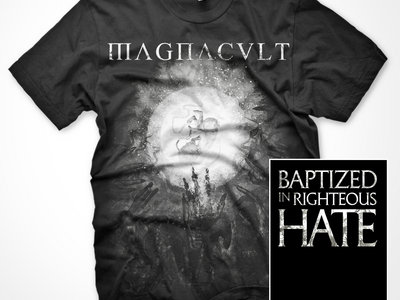 Infinitum Artwork by Gustavo Sazes on a Fruit of the loom black t- shirt.
Awesome design. Your new favorite shirt.

ships out within 2 days

Groove and death metal thrashers MagnaCult formed in 2005.
Their debut album Synoré, released in 2007, saw the birth of their signature groove and death metal. The band took their sound to the next level with their follow-up album Insua EnVenom. With their third album, INFINITUM, MagnaCult have nailed their music style, shifting up a gear to an epic release full of groove. ... more